Painting at the Hermitage museum in Santa Barbara 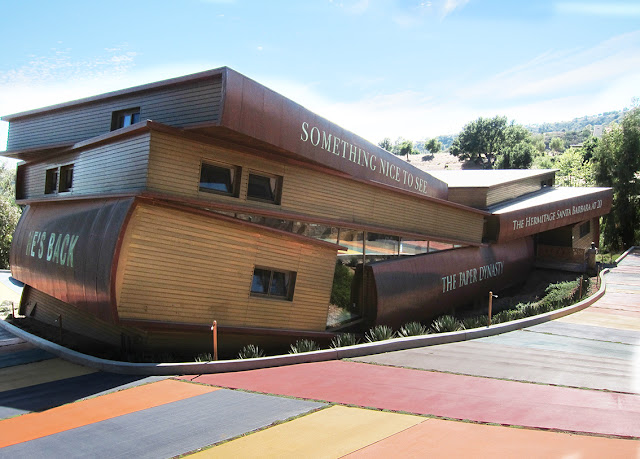 On a business trip last week to Santa Barbara and Salt Lake City I took the chance to meet with one of my favorite persons on the US- West-Coast, Ted Gardener. While going through his book house project on The Hermitage Santa Barbara 20 I discovered that a postcard I painted and sent to Ted is now part of the Hermitage art Collection. I’m of course uttermost proud that my simple painting is now part of one of my favorite places in the US!

I realize that this type of news is hard to understand without some explanation. Both my postcards and the Hermitage have until now been two personal projects that neither me nor Ted have had any interest in sharing. But since Ted has turned one of my postcards into art by displaying it as art in his art museum " The Book House" and since the Hermitage no longer is a secret and is actually open for public (two times a month if you book a tour) I might as well promote his fantastic place with my little painting in it.


The postcards don’t need that much explanation. I travel a lot to beautiful places, meet beautiful people and sometimes their beautiful work. When I stumble upon great work I want to store it in my brain. I learn by doing, so by painting a place I simply remember it better. When I'm finished painting it I don't really have any use for the painting.
I also want to thank the people that walk the extra mile to make the world a more fun and beautiful place so I usually send the painting to them with some kind words on the back explaining my love to them and their work.
Last year me and some friends stumbled upon the Hermitage in Santa Barbara and got a tour of the amazing place. So I painted it from my favorite angle and posted it to Ted with some kind words on the back when I returned to Sweden. Since my postcards are personal letters to people I admire I have not seen any reason to show them in public, but since this particular postcard got upgraded from postcard to "art" and is out on display I now proudly show it on my website.

The Hermitage Santa Barbara At 20 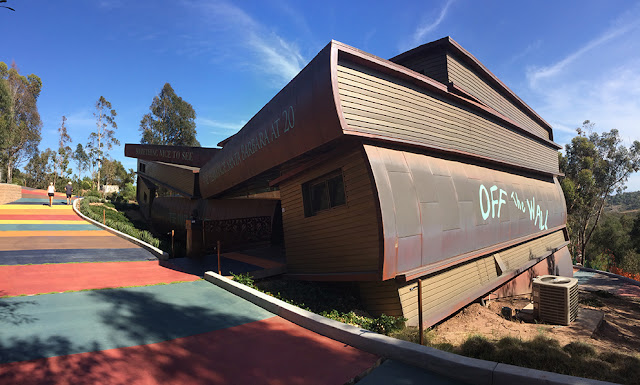 The Hermitage is a bit harder to explain and I'm not sure that I make it justice when I try to describe it. Just like most beautiful places it is almost impossible to explain and should perhaps not be so since it never was the intention in the first place. The Santa Barbara Hermitage should be enjoyed and the best way is of course to just visit the place and see for yourself.

The Hermitage consists of three houses and when I say house I mean a place with an inner space that you can enter and use. From the outside the houses could be mistaken for sculptures and it seems like most of them started that way, became too big, got an inside and became a house. At least that's how the Book House happened according to Ted. The three houses is "The Book House" witch is a pile of huge books that contains an art museum, the second house looks like a happy space shuttle and it is Teds studio space and the third one goes in the same style but looks more like a house and it is Teds home. The estate is filled with different pieces of art/objects. The great thing about all these objects from my perspective is the un-pretentiousness of them. Ted doesn't seem to box things like a usual person. If it’s an art object, an architectural object, a fake, a copy, a shitty object, a great object, a poem, a rhyme, a cactus, a plant, or a joke doesn't seem to matter and it seems to be no hierarchy between them. He just makes or buy what hi likes and just put it in his garden and houses. Ted told me that he started this collection by copying a sculpture that he could not afford to buy. And when I talk to him it seem like hi has no ambitions of being an artist. My feeling is that he just filled his life with physical things that he wanted. He just get ideas that he has to follow through and he has been doing that for the last decades and the Hermitage is the outcome of that. I believe that there was never the intention to build a museum in the first place, it just grew to be become one. When it started to look like a museum he turned his home slowly into one. When someone just do what he wants to do for his own personal joy for decades all small things adds up to something great and personal, quantity becomes quality, While walking on his estate and seeing the massive amount of work you slowly learn Teds personal language and start to enjoy to be in Teds world and it is a more fun and colorful world with great ambitions compared to many other ones.