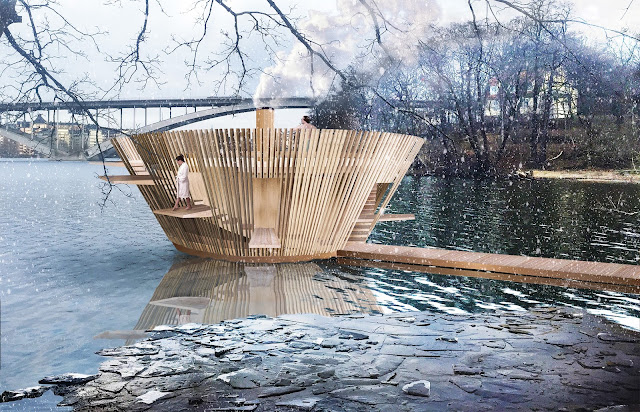 Anders Berensson Architects has been commissioned by the Stockholm Center Party to design eleven floating public saunas to be placed in central located beaches in Stockholm. The saunas contains a men and women sauna and dressing room plus a common roof terrace. The stairs to the terrace is becoming wider and longer in some locations creating springboards in different highs to jump into the sea. 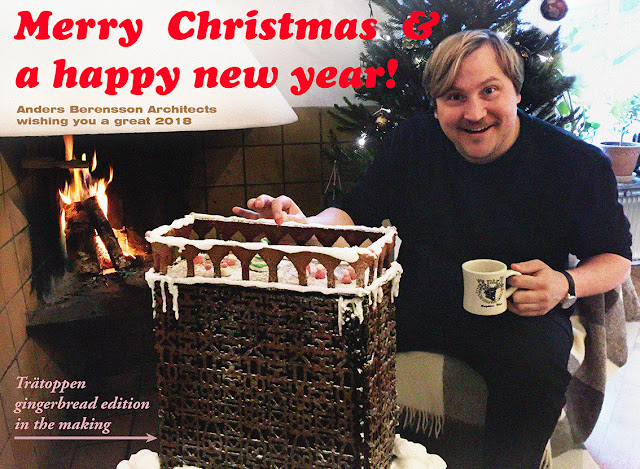 Merry Christmas and Happy New Year 2018! 2017 was a great year for the office with great new projects and we just moved in to our new office space. We got several projects on the drawing board for 2018 plus some fantastic projects that will be built this year. Above you can see the construction of the gingerbread edition of our skyscraper Trätoppen.
Posted by andersberenssonarchitects at 07:02 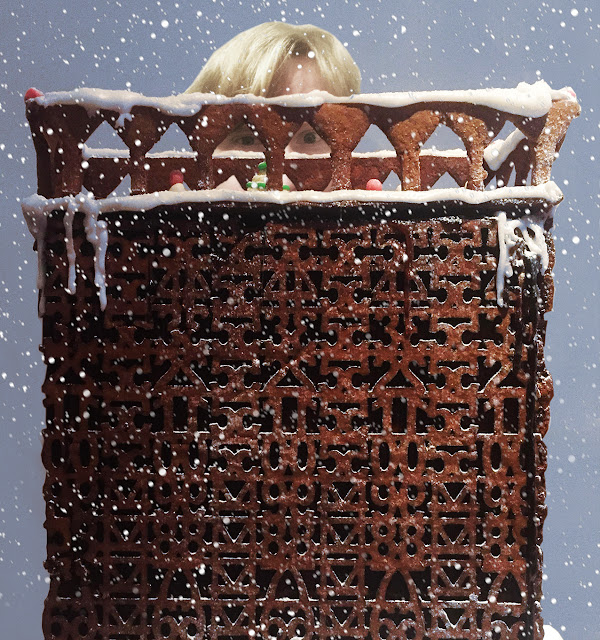 If you are in Stockholm during December do not forget to visit Arkdes and watch Trätoppen as a gingerbread version.
Posted by andersberenssonarchitects at 13:58 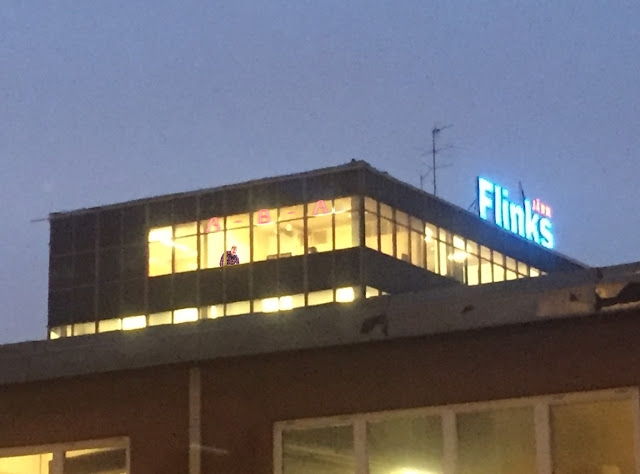 Anders Berensson Architects are pleased to announce that we are moving to a new office in Stockholm. Our new office i situated on the top floor of the classic building Möller & Co’s in Slakthusområdet designed by legendary architect Ralph Erskine. Our new address will be Hallvägen 21 from the beginning of December 2017.
Posted by andersberenssonarchitects at 14:37 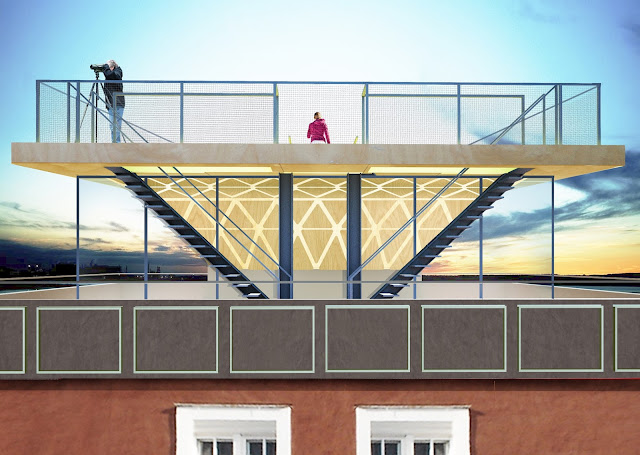 Anders Berensson Architects has designed an extension to a Ski Jumping tower in Stockholm. The extension will allow ski jumping but most of all open up the tower for other events such as snowboard and big air jumps during the winter and nice views and bird watching all year around.  Due to a combination of less practitioners, the fact that the tower has become to short for professional ski jumping and warmer climate making the lake bellow the tower not freeze as frequently as before the tower has since long lost its main function as an arena for ski jumping in Stockholm.  Therefore we decided to think of the tower more as a multi-functional view and jump tower. The extension is designed as a continuation of the jumping slope, a board that sits on the old slope following its angle. At the top of the tower the board bends to a horizontal position making a start for jumping and a viewing platform. The bending board also create a room below that will be covered in glass and give a panoramic view over Stockholm and the National Park Norra Djurgården.


All permits are approved and building start is planned in 2018. Given that the tower is a landmark in North West Stockholm the design has been carefully reviewed by both the Stockholm planning office, the Stockholm Beauty Council and the Royal Court. 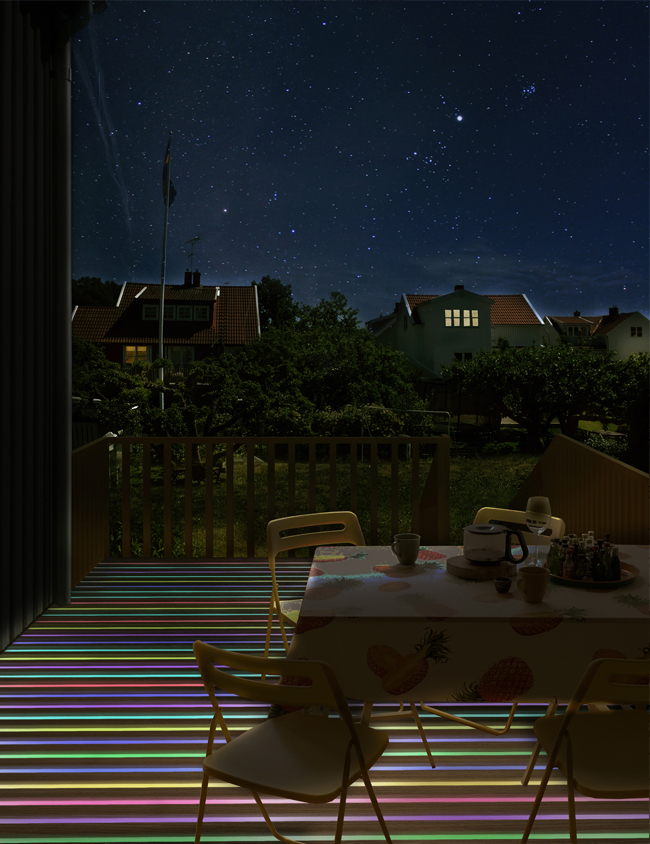 Anders Berensson Architects has designed the remaking of a porch in Stockholm into a gazebo hideout. When proposing a renovation plan for a private family we know that renovating a whole house is expensive if it includes to much carpentry. We usually propose to just fix what is really necessary and spend a bigger part of the budget on a smaller area that can become the jewel of the house without costing a fortune. In this project we did just that and focused on the house veranda.


The 1930th  house is located in the "Egna hem" (self built) suburb of Norra Ängby in North West Stockholm. The house is small but well planed and in a decent shape. It is however in need of some new layers of paint plus some smaller building projects. One of those projects is the veranda that needs to be rebuilt plus its surrounding windows. The windows and glass doors we decided to make bigger with lager glass surfaces to get a more spacious feeling inside the living and dinning room that surrounds the veranda. The Veranda who is half floor above ground level also serves as a roof to the second entrance of the house. This space underneath the veranda deck is also the view from the master bedroom. Giving the central position of the veranda we decided to put our efforts here. We decided to upgrade the underside of the veranda by adding a new floor, some new supporting walls and a new veranda deck plus a small pool under the veranda stair. The veranda deck/roof needs to protect the underside from water. We proposed to make the deck watertight by filling the gaps between the boards with colored poly-carbonate stripes. The colored gaps creates two visual effects. It cast colorful shadows down to the ground level at noon and in the evening it light up the deck above creating a colored floor.

The poly-carbonate stripes becomes small gutters. Each  stripe ends with a chain that leads the water down to a flowerbed. The vines climb the chains and creates a visual protections towards the neighbors. On the same level right next to the flowerbed is a workbench that turns into a small pool underneath the stairs. 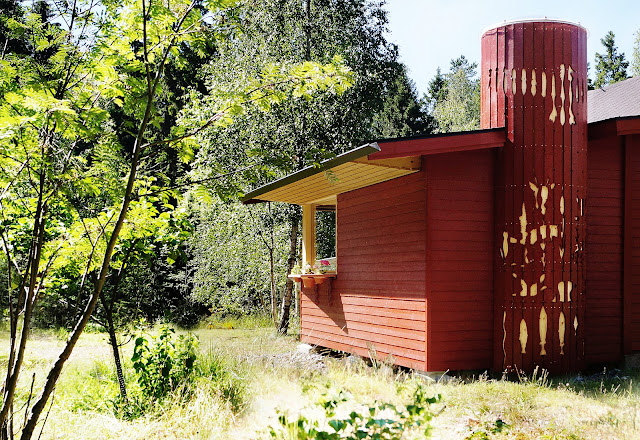 Anders Berensson Architects has designed and partly built an extension to a house in the Stockholm archipelago. To keep a low budget and still being able to elaborate with architecture the office divided the house into two categories. “The house box” that is designed like a simple box to be built on site with local materials and building techniques and the “Prefabricated architectural elements” that are designed and prefabricated by the architects and later inserted into the house during the building process.

The house is designed with a focus on simplicity and function just big enough to host a sleeping area and a small space for working. The office then focused on designing two custom-made windows that could be built and prefabricated by the architects for those two spaces and purposes. One window to look towards the outside fields while working and one window to look towards the sky when resting or falling asleep. Another goal with the design was to redefine the idea of a window as a flat readymade glass piece into an architectural element that creates its own space with a clear focus towards the outside. This goal led to the design of a sky tower one can crawl into when being in bed totally dedicated to the sky and one corner window with a desk inserted to it that creates a work space on the inside and table for flowers on the outside with a clear focus and direction to the outside field. The office also designed and built the lamps and some other small architectural details that could be added on during the building process.

Looking towards a starry sky when falling asleep is a countryside luxury. We wanted to enhance that feeling by making a round tower dedicated to that view where you can lay down in bed and only see and focus on the sky above. At day time the tower takes in a lot of light and is a good place to sit and read. At night time it is the perfect place to study the stars and space. The towers inside is cladded with spruce boards with a sky light on top that appears invisible when looking out.

The outside of the tower is cladded with overlapping boards. There is a local tradition of making jig saw patterns in this type of façade so we decided to design a pattern of big animals, amphibians, birds, flowers and fishes that are living in the archipelago and the Baltic Sea.

The Desk window
The Stockholm archipelago is known for its fantastic flora of wild flowers, outside the house lies a meadow with many of the species represented. We designed this window to focus on this local treasury. The spruce board celling continues seamlessly above the window and protrude long enough to cover the sky and direct sun light framing a view towards the meadow. A desk is inserted through the corner window. On the outside the desk I made out of terracotta red concrete with holes for flowers to grow. The concrete was casted against the cutaway part of the wood board sitting on the inside so one can see the subtle pattern of the wood continue into the red concrete board outside. The inside of the desk is made of birch plywood with holes cut out for different purposes. The biggest hole is for sitting in the corner looking out. A bench going under the desk in the corner creates divan type of chair where the whole becomes the armrest. The mid-size holes are for ventilation, cables, lamps and pencils, the tiny holes are pencil sharpeners.

Adding architecture
The window was inserted after the primary structure and the cladding was done by first placing the glass and then the boards holding it in place. The desk on the inside and outside was then added as the last piece of the window. The concrete casting and the wood desk was built by the office in Stockholm and transported to the site. Unfortunately those photographs were lost.

The tower was prefabricated on site and added when the primary structure was up.
The construction of the tower was made by jig sawed horizontally placed plywood sheets interlocking with vertical studs. The last layer of boards with the pattern of the local fauna was jig sawed and mounted at the end of the building process.

The lampshades of thin birch plywood that was cut, boiled and bent into its shape and then mounted on different stands depending on function. The lamps was added as the last piece to the building.