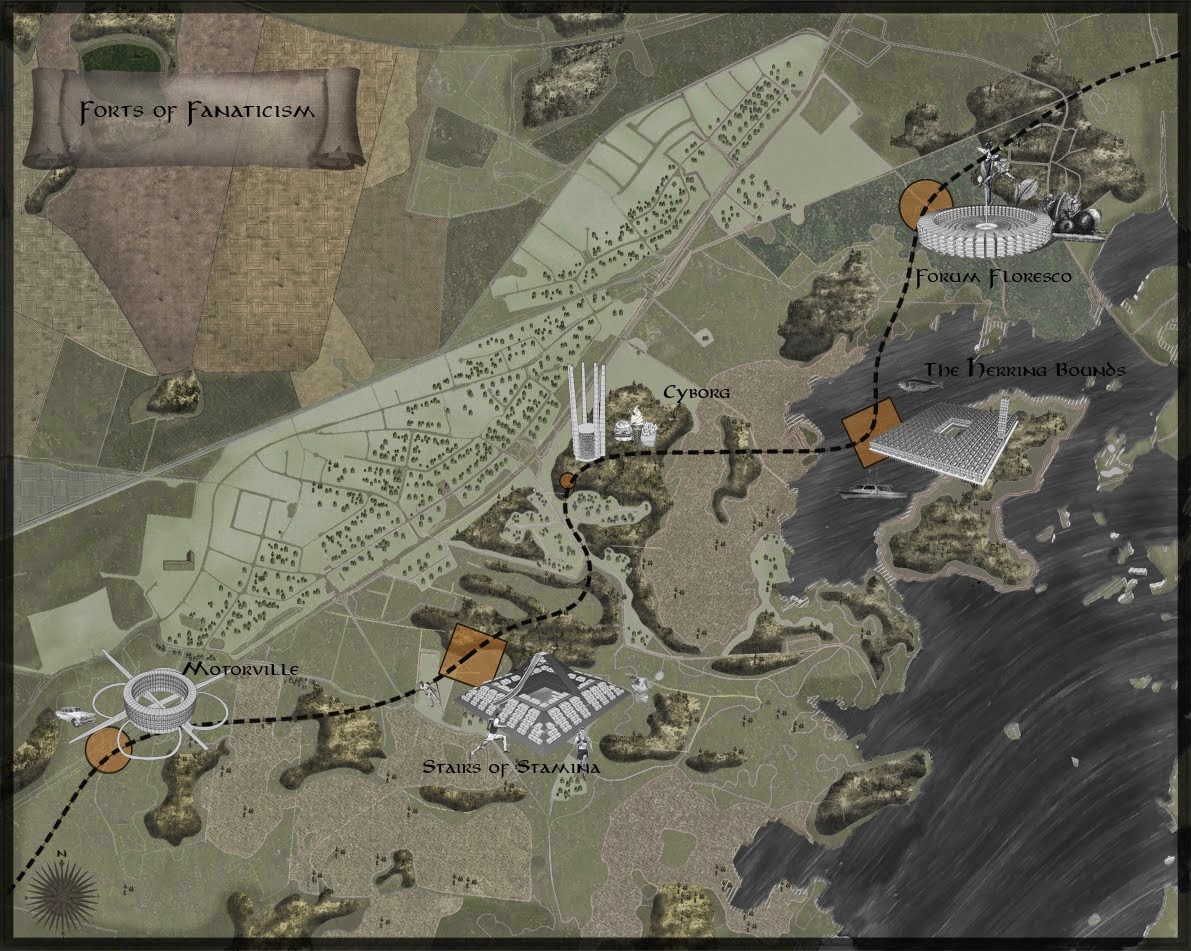 Forts of Fanaticism is an entry in the Europan 12 competition, the world's largest architecture competition which is organized every second year. Our bold entry was awarded with a special honorable mention for the Swedish site Kalmar where we proposed five different settlements at this rural site for five extreme lifestyles where its enthusiastic inhabitants can dwell and prosper with people that share their specific passion in life.

In the past twenty years the most radical change in Europe has been the diminishing power of borders. Psychical and political borders between countries has dissolved, bridges and tunnels has been built and the cost for air transportation has reduced and is now equal to a shorter train ride between two major cities in Sweden. This has led to a closer contact between European cultures and the younger generation of Europeans travel, work and study all over Europe and speak in most countries fluent English, thus making communication with each other very easy.
When the national psyche and the borders of countries becomes less interesting and important, the citizens starts to make their own definitions of how they see themselves and what they want to belong to. This specialization and search for each and everyone’s individuality can take various forms and with the Internet that has made the world smaller, one can now communicate with people all around the world sharing the same interest and beliefs. This has led to a Europe that can be seen as one major country. A country where many people and with the technological tools to team up with likeminded has made a flourishing arena for different types of fanatics to connect.
We see it in right wing and left wing organizations teaming up across borders in Europe but also in people with different interest sharing the love for their specific subject across old borders. With so many people that can easily move and communicate, a new market for people to join in physical settlements has been created. Because if you are enthusiastic about a certain thing, why not surround yourself with others that share this passion?
These new kinds of dedicated settlements can be built anywhere in Europe even in the far distant Kalmar region. These settlements can also be architectural more extravagant and Utopian than architecture erected to please a local crowd.
As each built community are tailor made for that specific interest, these full time hobbies can evolve even further.
In this proposal we have designed five forts where common interests in a specific subject has been the main drive of the design. The forts are made for people with a common love, but love spreads and these hubs of intense specialization will of course be enjoyed by local citizens of Kalmar as well, that will have a highly interesting smorgasbord of possibilities and advanced thinking that will enrich the whole region. 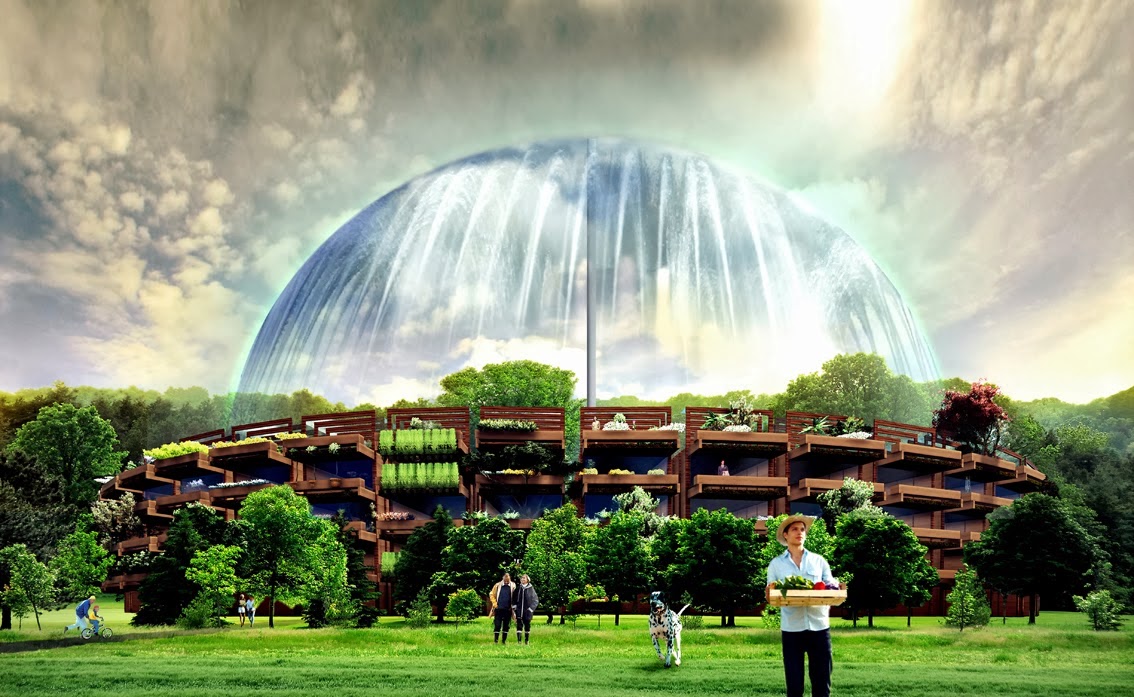 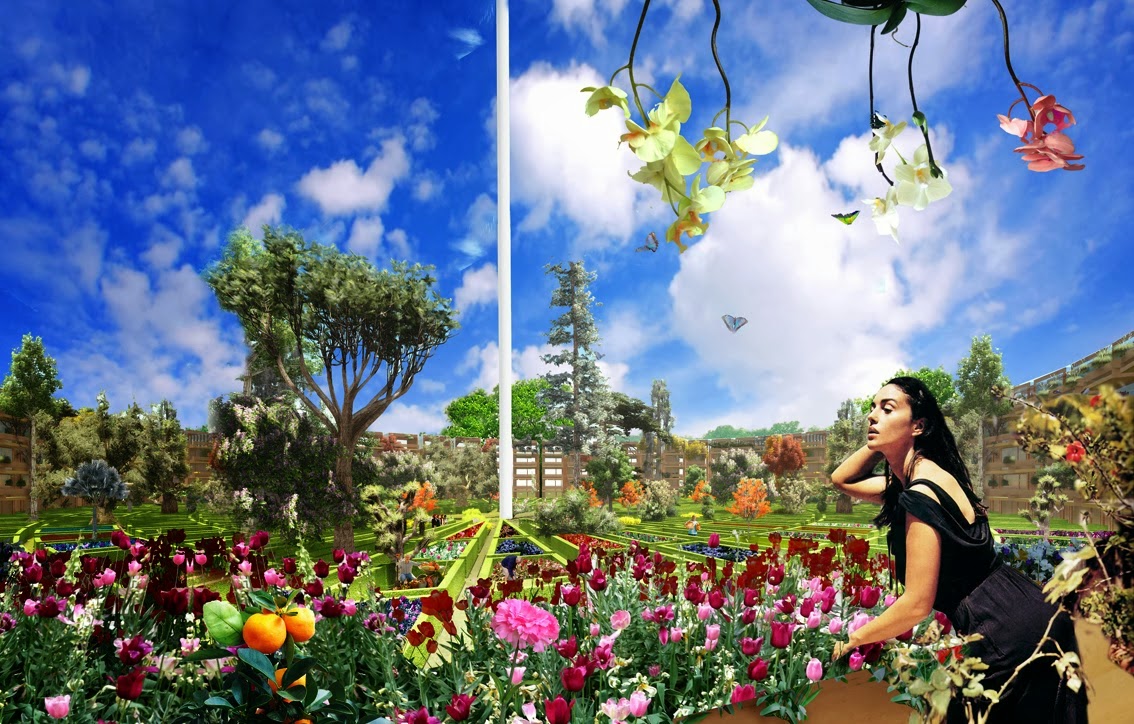 Forum Floresco is a fortress for those who love gardening. The building complex is designed as a circle of 60 row houses. Each row house is roughly 200 sqm with an extra space for gardening of 230sqm. Each row house has a flexible plan with a staircase and a bathroom core, making the house easy to divide into 5 apartments sharing one kitchen. The complex can in total then have 300 apartments at its maximum. The extra space includes underground parking and plant storage
for plants who sleeps during the winter, a green house on the roof for exotic plants and a garden pointing towards the center of the complex.
The central garden can be divided into several smaller gardens. Where people living on the upper floors will have their gardens further to the center and still be able to see their gardens from their balconies. Each garden is divided by a hedge giving privacy while sitting down and social interaction possibilities while standing up.
The house complex has a central square where all of the citizens nearby can buy locally grown crops. The center is reached by several small paths between the hedges. In the squares center a high water sprinkler rises. The sprinkler can make a perfect half square of water, irrigating the central garden when needed. 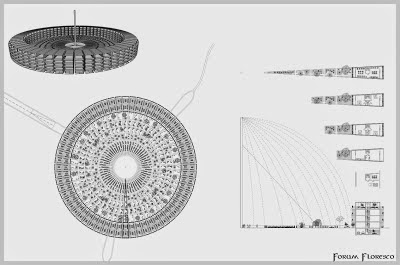 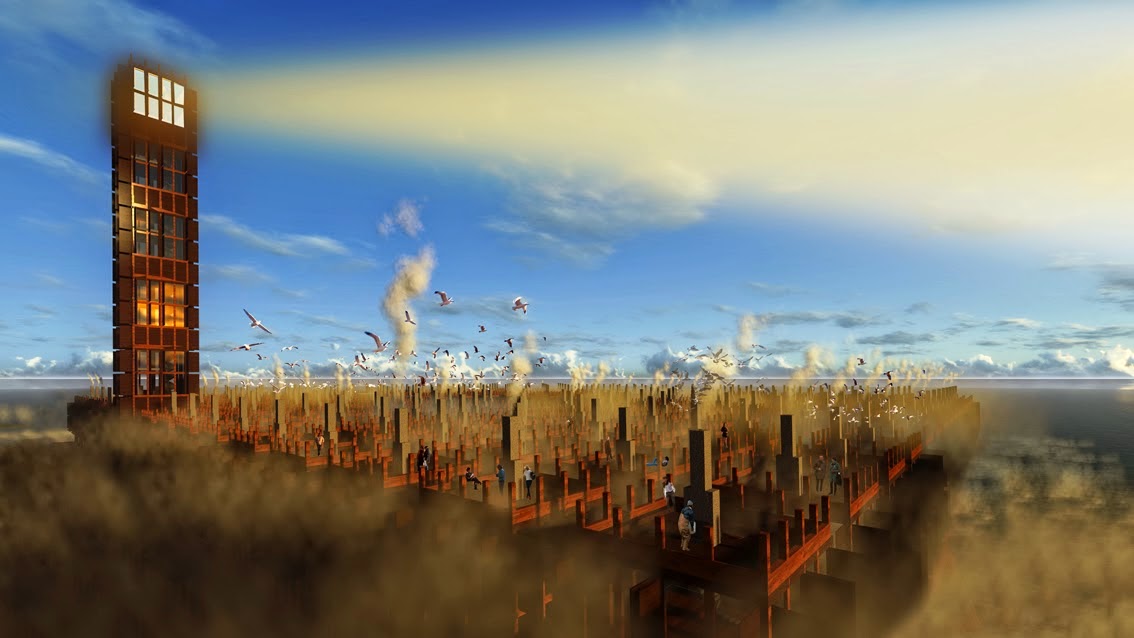 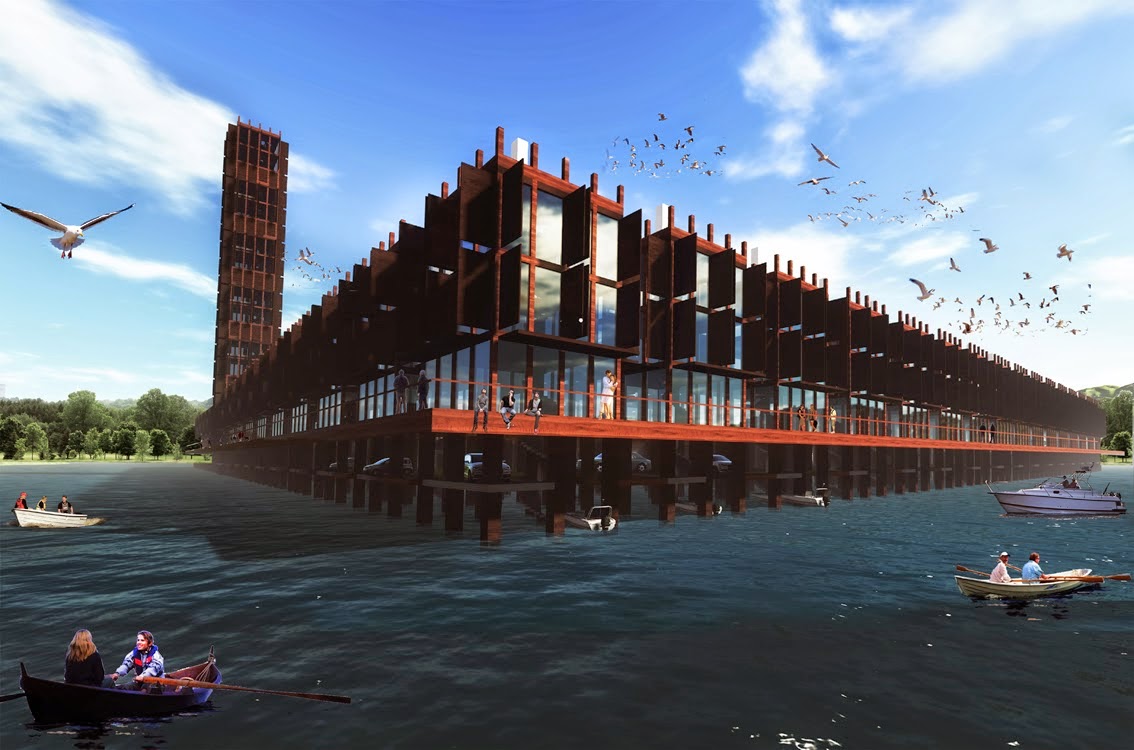 Many people dream of the picturesque fishing village with its narrow streets and dark tar drenched wooden houses with its rich smell that blends so well with the salty wind from the sea and the sound of seagulls.
The site’s proximity to a beautiful archipelago would be idle for a fishing community where anyone with the dream of catching fish as a living can set up their new life.
The buyer of these houses will have a private boat harbor just under their house as well as a place to park their car underneath. The ground floor can be used for commercial use, to sell the newly caught fish or the smoked herring or other whitefish. The rooftop is equipped with a sturdy barbeque/fish smoke.
A lighthouse stands tall to guide the boats around treacherous cays.
Each house has shutters that can be closed or open as seems fit.
During the summer time hordes of tourists and citizens of Kalmar will probably wander around the narrow streets and the central square where it is possible to buy fish direct from the boats.
During winter the village will have a more closed appearance. 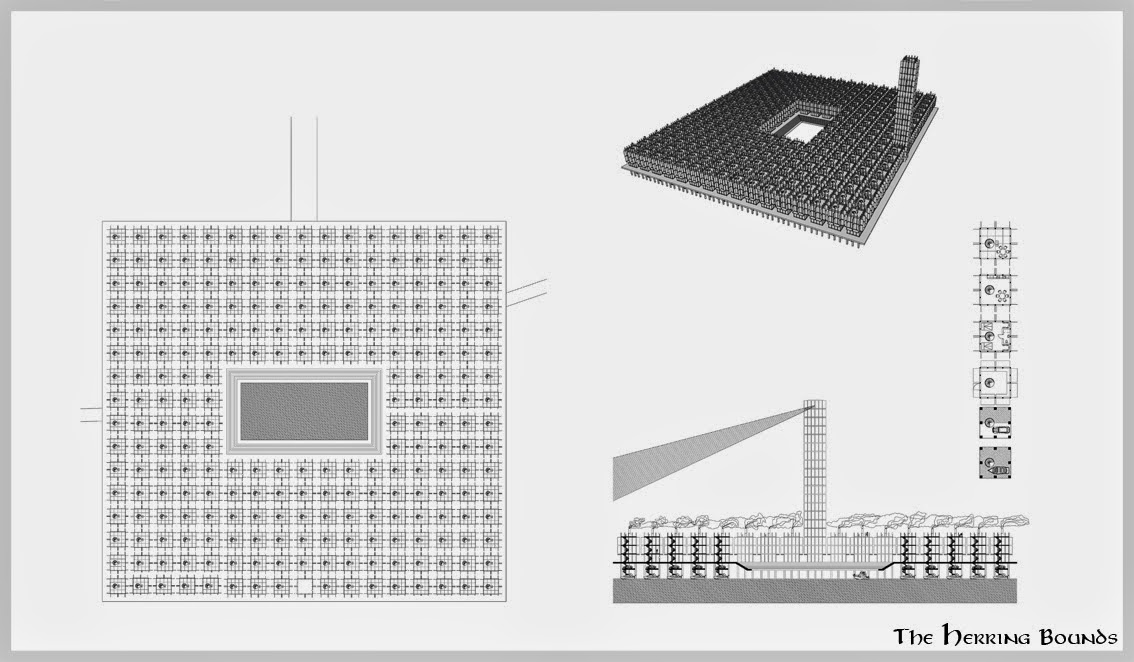 The Stairs of Stamina 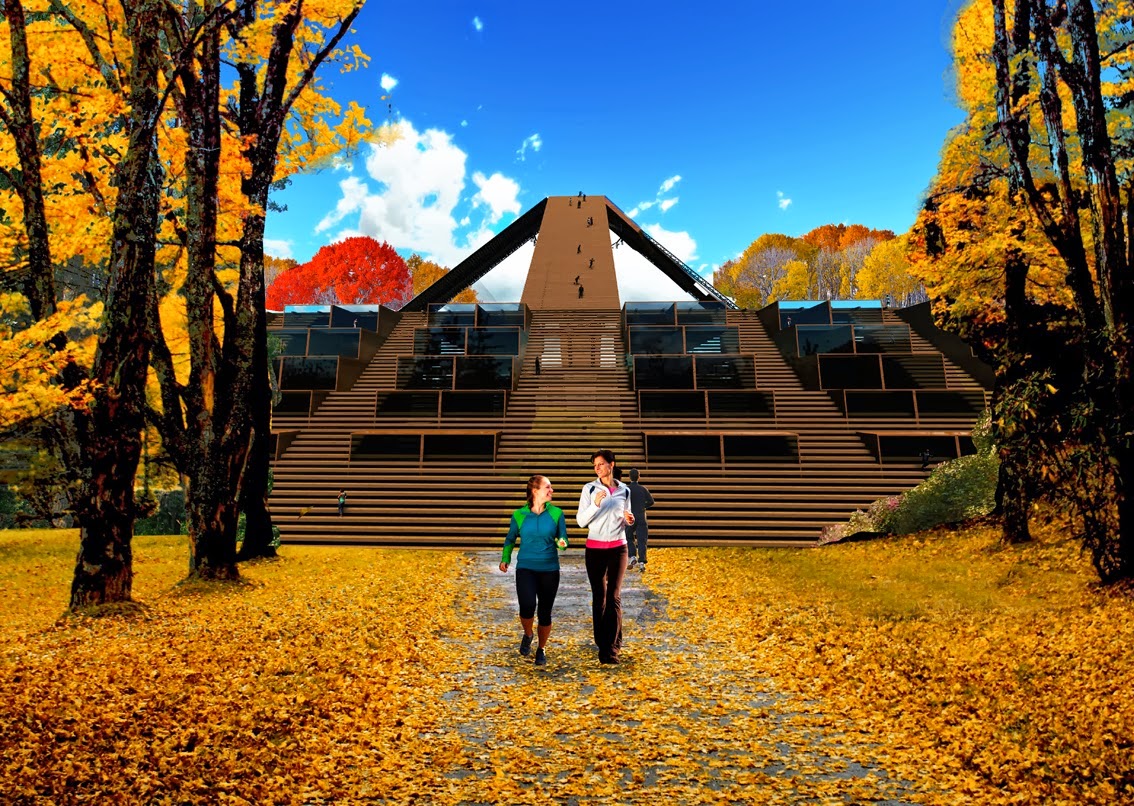 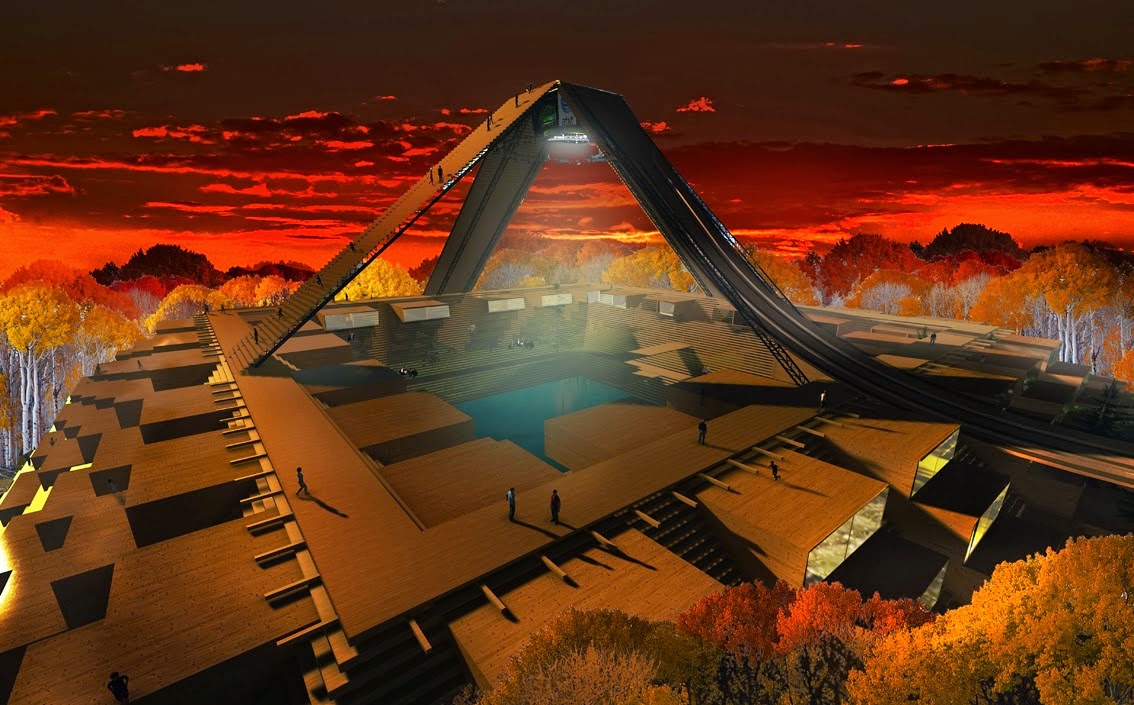 Being healthy and exercise can take up oceans of time in a person’s life and many people organize their whole existence around being physically active.
By creating a community where this lifestyle is embraced to the fullest, the inhabitants can enjoy a rich social life and at the same time engage themselves wholeheartedly in sports.
The complex is a cut pyramid shape with stairs going around it, creating a great place to train and also a great place to sit around observing the neighbors.
A ski jump tower and three stairs connects at the top of the cut out pyramid.
In the middle of the complex, under the connecting stairs, is a multi-functional arena where it is possible to see various physical activities take place, either by the citizens or other professionals.
When there is nothing going on at the arena, a large jumbotron with a rig of lights just under the top platform, shows sports on the huge screens.
The apartments consists of a corridor where one can run back and forth to warm up before exercising, a bathroom unit with a sauna at one end of the apartment, and a bedroom at the other end. In the middle is a large open space with a kitchen, a large sofa and plenty of space for gym equipment. Every room has large mirrors to show off the great bodies of the citizens and the floor is treated with a rubber material that is nice to exercise on.
In the core of the stairs there is a large indoor space for different sports that the inhabitants and the citizens of Kalmar can take pleasure in anytime of the day 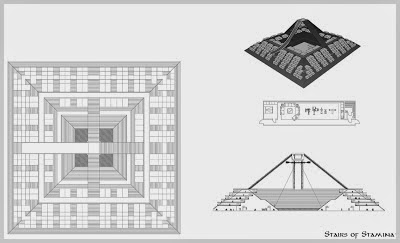 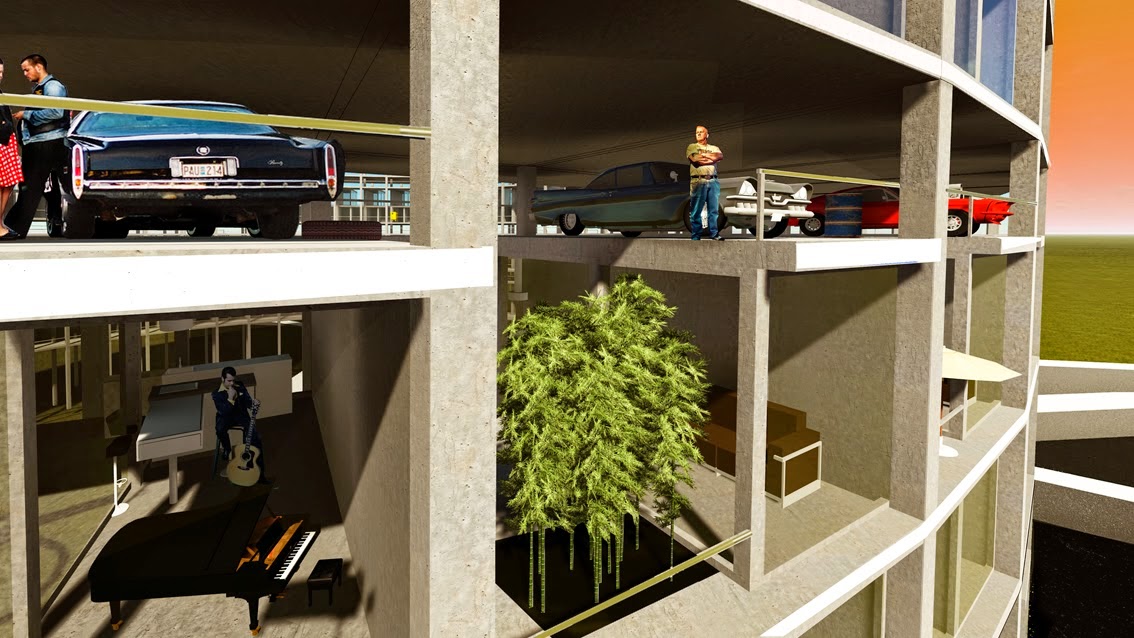 Motorville is a compact, stacked typical Swedish residential neighborhood for the flourishing Swedish motor culture called “Raggare”, a lifestyle deriving from the Rockabilly culture. The interest for motors and the stacking of houses makes it possible to avoid the urban sprawl that is usually connected with these types of settlements. The complex consists of three streets stacked upon each other with 60 homes on each streets, reducing the footprint by a third to a normal street. Each home has a 170 sqm divided in 30 sqm of double parking at the top floor. 30 sqm of living and 30 sqm of garden on the second floor and 60 sqm of living and 20 sqm of garden on the first floor. The top floor is a space for storing your third car, boat or other big toys and gadgets that “Raggare” usually have. There is also some space over for the other surrounding inhabitants to store some gadgets if needed. Since “Raggare” loves the motor culture the house is placed over the old highway south of Rinkabyholm, a place where other settlements would not conceptually fit. The “Raggar culture” is a unique and spectacular culture only existing in Scandinavia and it is time that this culture is celebrated with an architectural statement; a power house for motors. 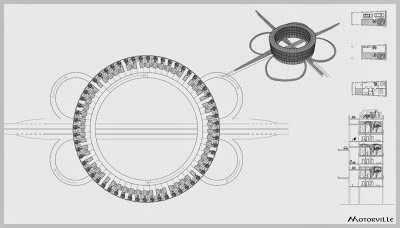 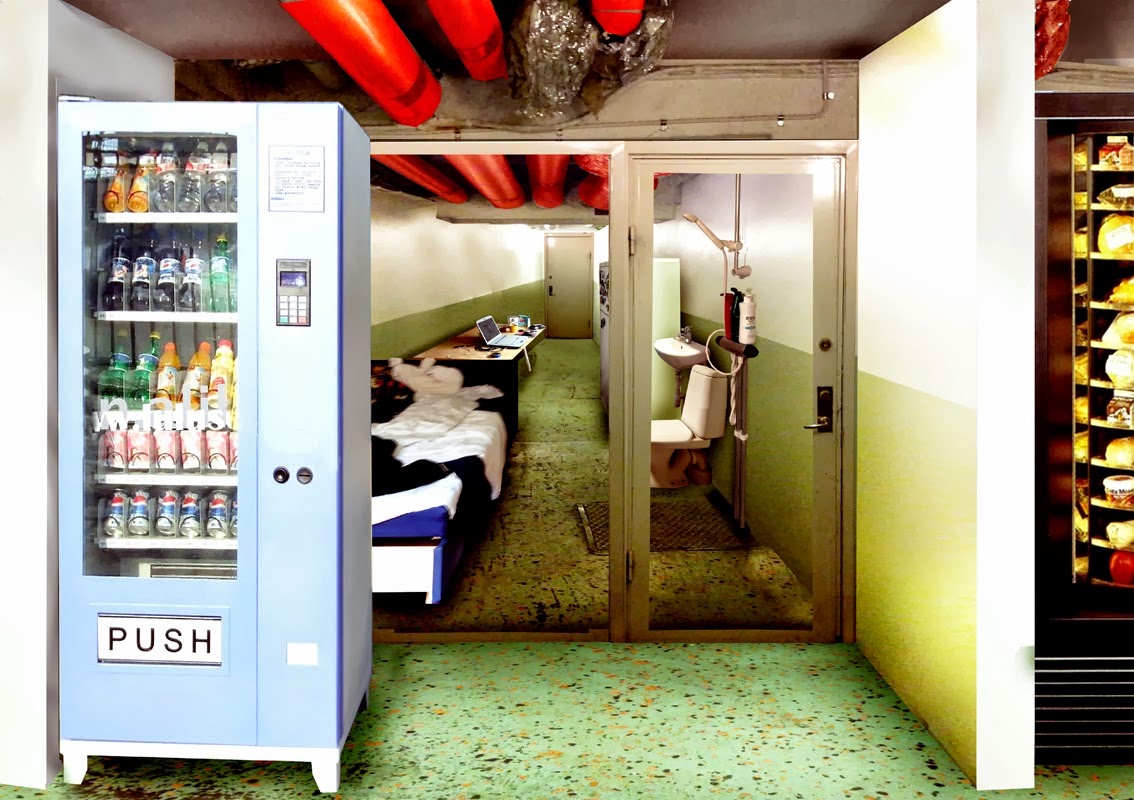 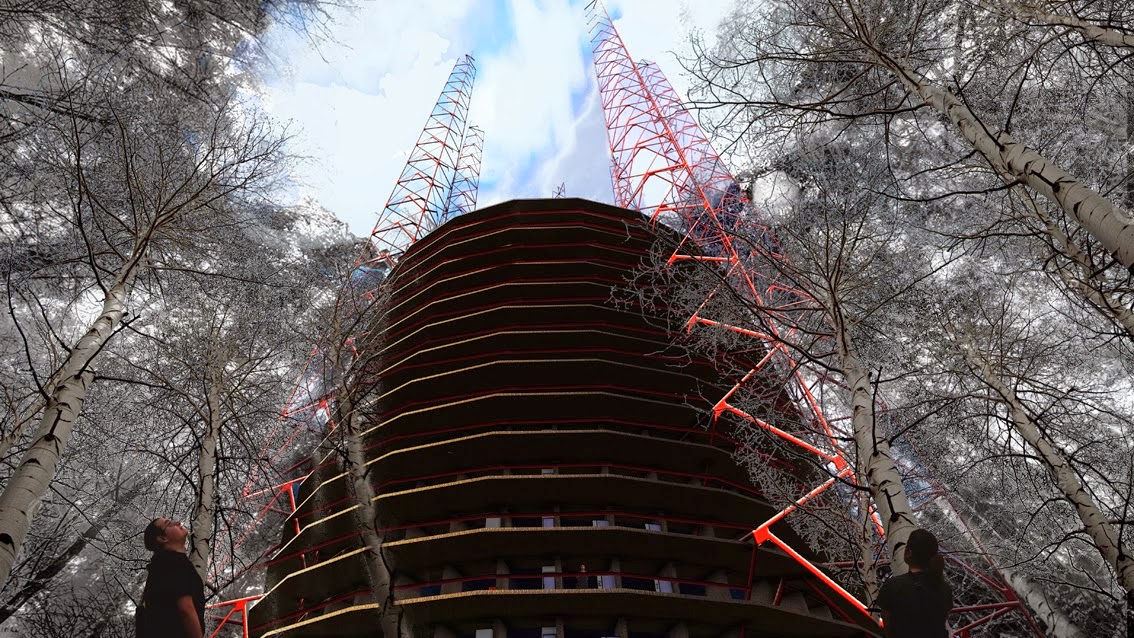 True fanatics seldom need architecture, they just need their primary tools for conducting their specific subject of interest. This high-rise is designed for the computer orientated youth living their social life through the web. Living your life and sharing your interest through a computer screen reduces the need of architecture to a minimum. This life doesn’t need daylight, bedrooms, living rooms or other normative rooms programed for social interaction inside your home. These kids doesn’t even need a double bed because the most likely will not share a normal relationship. They will have cybersex via their avatars instead. Therefor the high-rise provides only the ascetic needs for keeping the body running. It has a shower, a toilet and a small kitchenette which is enough to survive. The luxury is the deepness of the apartments where daylight won’t cast glare on your computer screen activities. Each floor also have a dark room in its core, where you can team up with other fanatics providing the possibility for epic computer events or hacking. This life might lead to a shortage of vitamins, to prevent that from happening the communication up and down the building is via exterior corridors and stairways. Each apartment also has its own spot on the outside corridor for a soda machine, food machines or maybe a pinball machine, making the corridor into a public amusement park where people can meet and absorb some sunlight while shopping for food or trying to beat a videogame high score.
These areas can also be used by the whole region, making it into a compact mall of fast-food and gaming.
The staircases and elevators sits in radio towers surrounding the building, making Kalmar the most connected town in Europe with the most connected youth in its core, guarding the freedom of the World Wide Web and at same time developing highly advanced applications and technology for the future 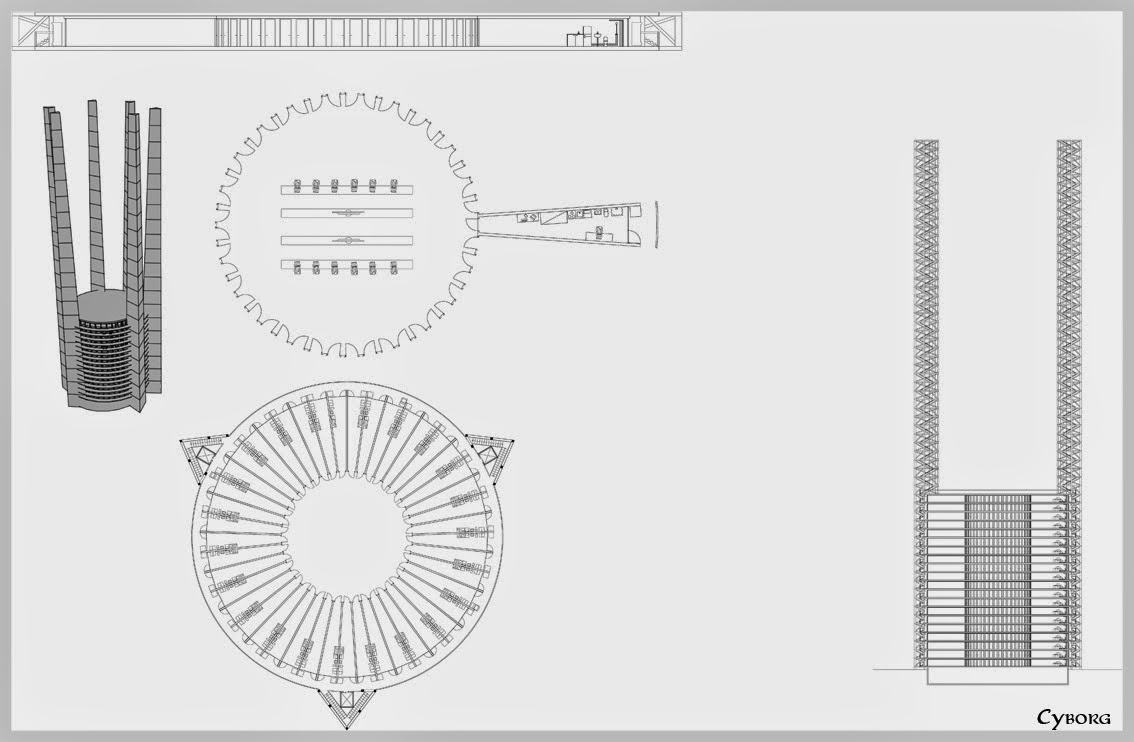