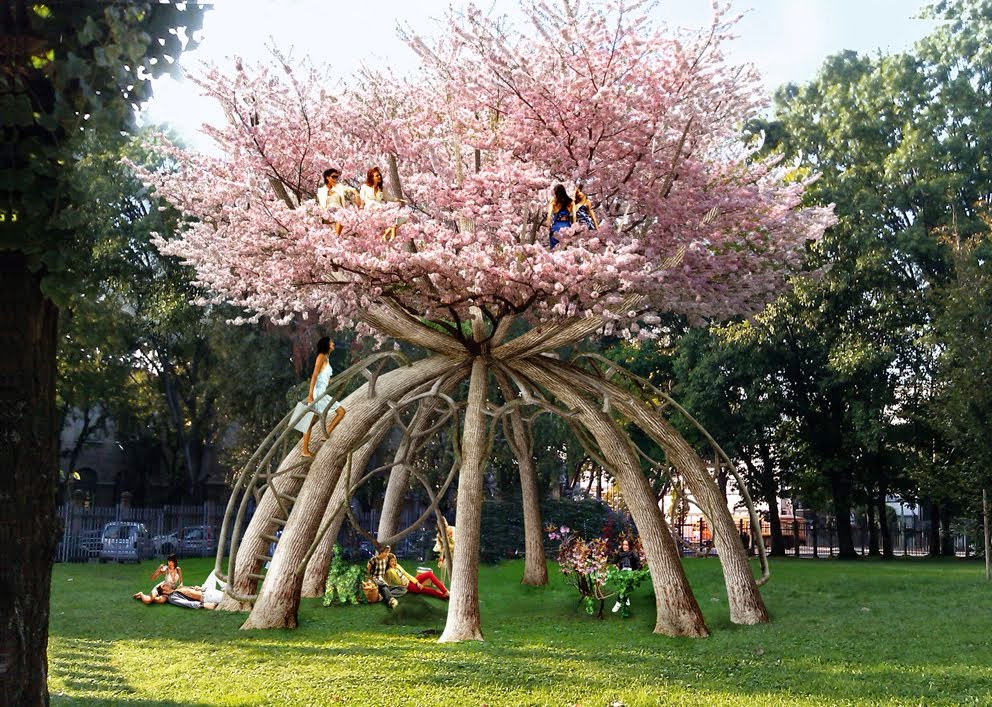 An invitation as guest teachers by Politecnico di Milano for their week-long workshop MIAW2.The workshop, playing with the metaphor of forests, aimed to generate new visions to explain the contemporary and immediate future ways of being in the spirit of green design, resilience, recycling, and ethical consciousness.Our intention with the project was to construct a study retreat at the campus with patience as the main key for the design. If we can be patient with the building time we can reduce the need for transportation, waste of material and different manufacturing processes, simply by helping nature grow in a more architectonic and useful way. The final result can be enjoyed at Politecnico di Milano in about 60 years from now.

During the workshop we gave nature all the guidance and directions to help it grow into useful structures and objects.There are different methods and tools to guide and control the growth of trees and plants; bending, twisting, pruning, grafting, braiding, weaving and to control the amount of water and light the trees get are just some examples of these.We used almost all of these techniques in our creation, which involved creating a structural system for the building and also stairs and furnitures, all made out of trees, plants or grass. 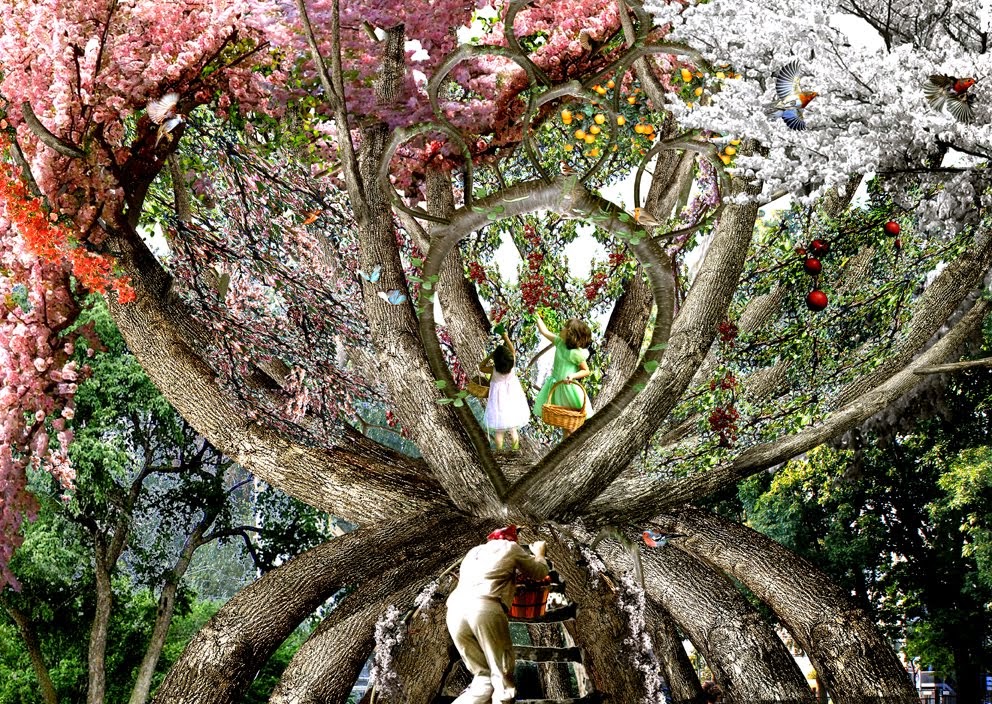 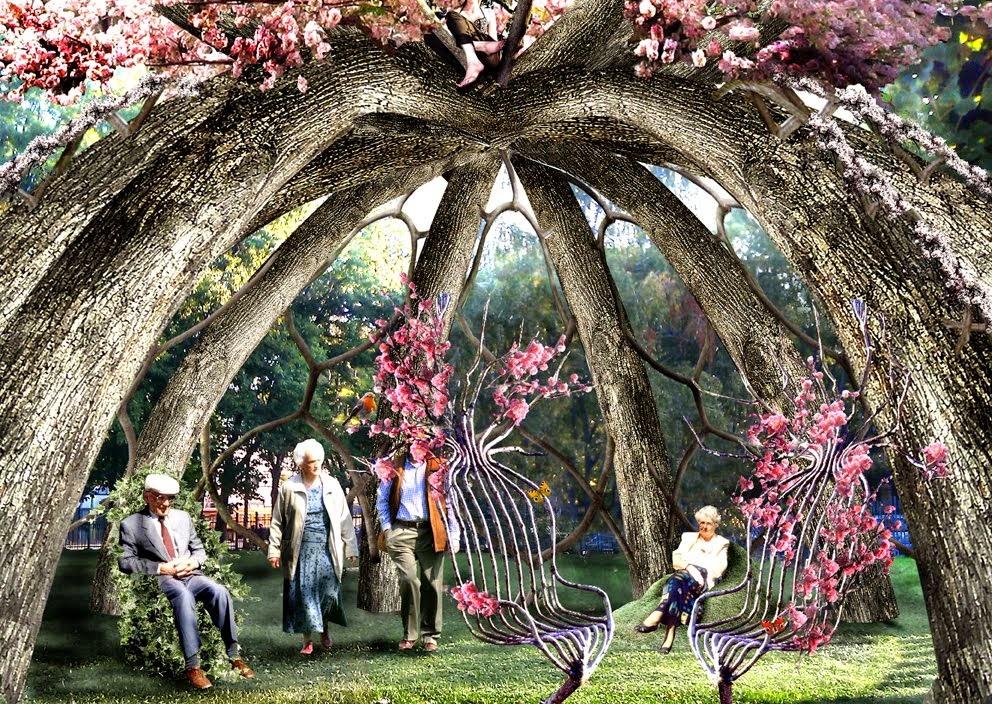 Our structural frame for this project became ten japanese cherry trees that was planted in a circle with a diameter of eight meters with a six meter high temporary wood structure in the center that is acting as a guidance tower for the growing structure.The trees were planted with an equal spacing from each other, except for four of them that became two pairs of stairs to the future upper level.The cherry trees was ideal to plant at that time of year and also had great features for achieving the desired structure. Thin ropes were tied around the plants and were slightly bent towards the temporary tower.As time passes the trees will form a dome when they reach the tower, and then designated by to change its direction so the final form will be an hourglass, a suiting shape for the project and also a very practical form as we now have two rooms with different modes in the building. 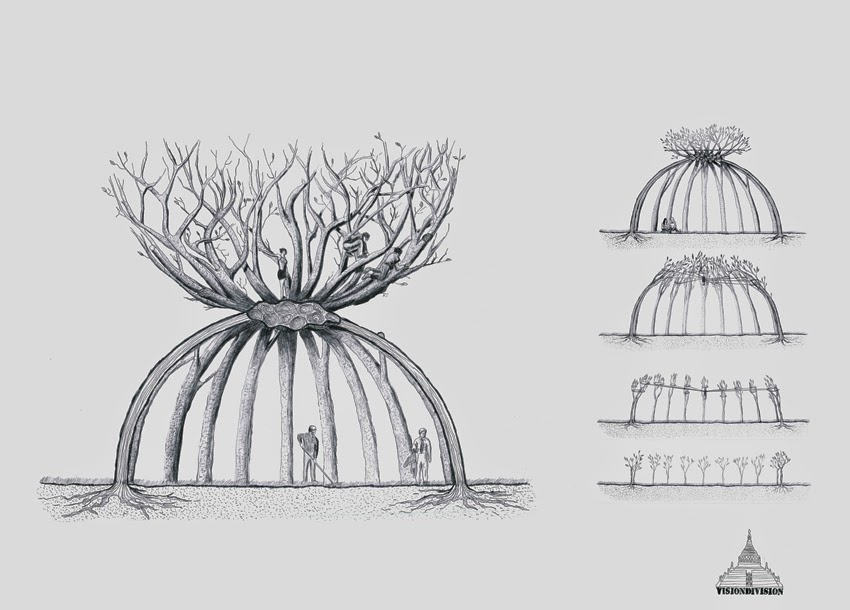 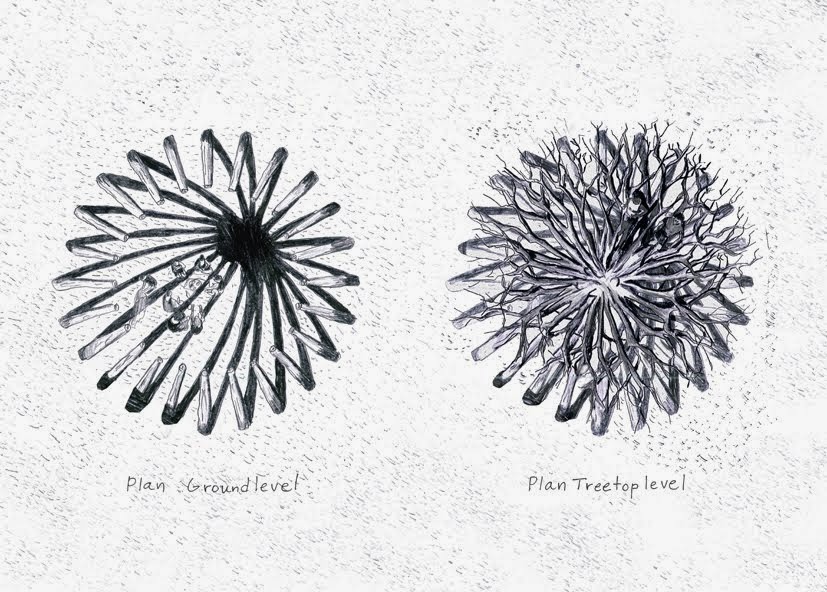 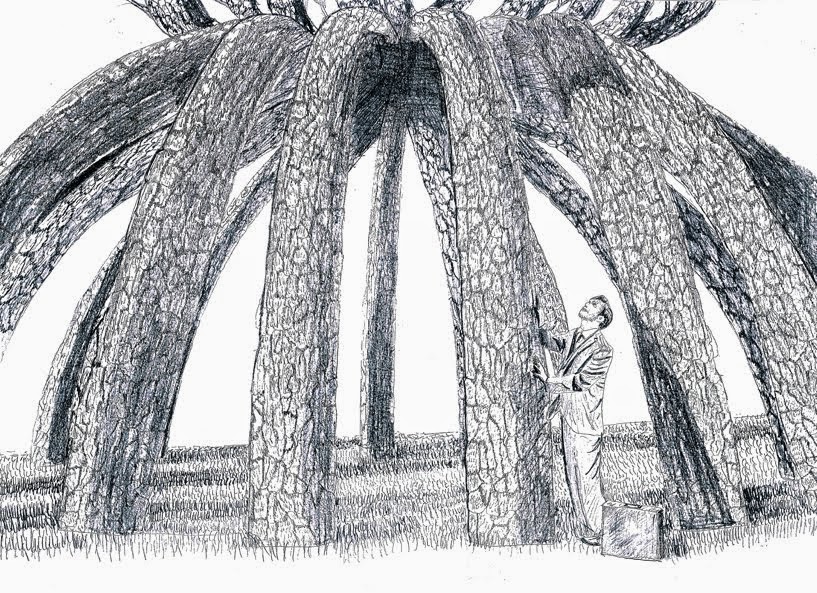 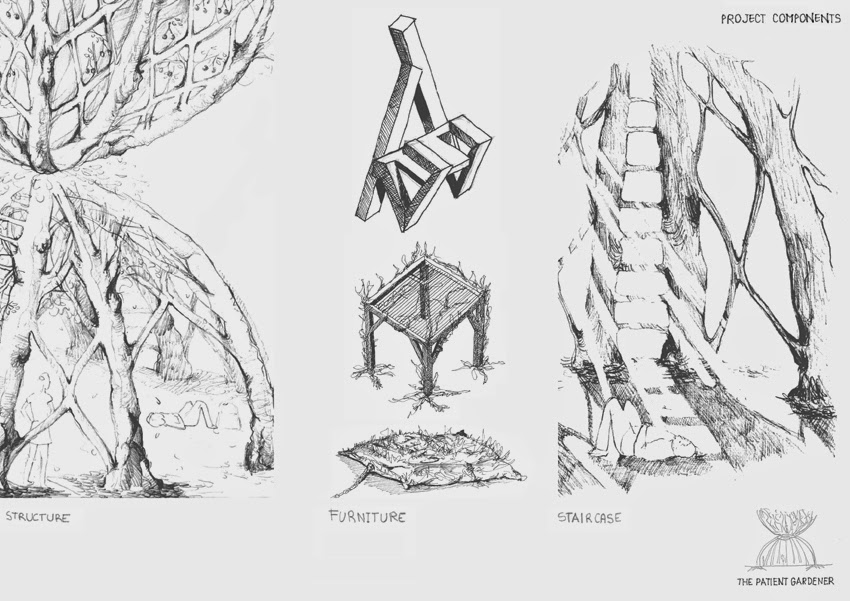 The small branches on the plants that will grow into stairs are guided with wires to each other and will hopefully be useful later on. The rest of the stairs can later be grafted in the stair trees.On the ground level we designed furniture out of grass, trees and plants.There are a dining group consisting of a table with four chairs.The chairs are plum trees where one sit at the lowest fork and the branches are guided into canopies so the future visitor can sit in the chair while at the same time eating delicious fruits.

The table is made out of slender wooden pieces with strings in the structure, which forms a skeleton where hedras can grow and later take over the structure completely.A comfortable chair made out of grass are located on the other side of the ground floor.The grass chair is put together with the use of a custom made cardboard structure, shaped for maximal relaxation and that is painted with a protection coating and that is later filled with soil on site and draped with grass.

A grass puff is also made and placed in the tower where the floor of the upper level will be.
The puff is a big potato bag filled with straw, soil, fertilizer and grass seed.An organic rope is placed with a third of its length inside the bag, and the bag is later sewn together.The rest of the rope is placed in water so the puff gets water and will later be covered in grass, so when the trees finally reaches this level and becomes the floor, it will already be furnished. 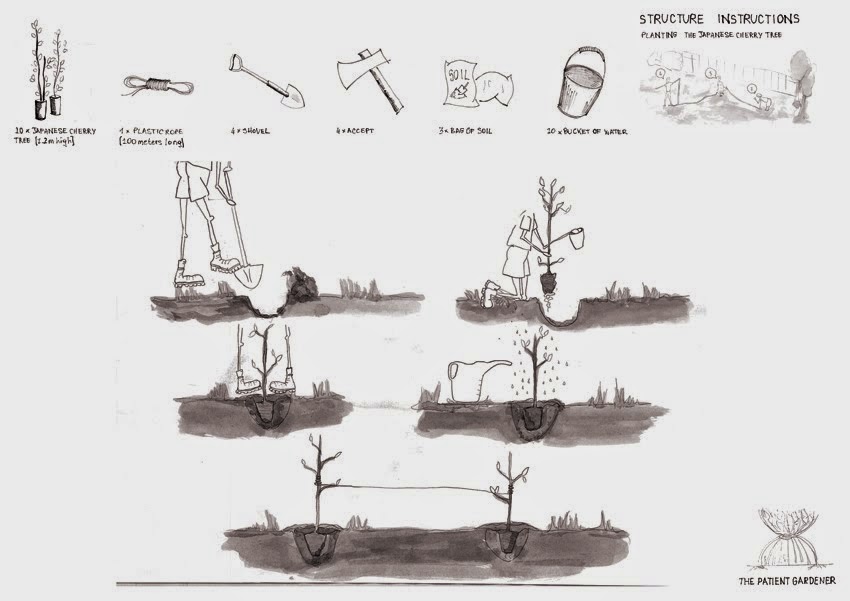 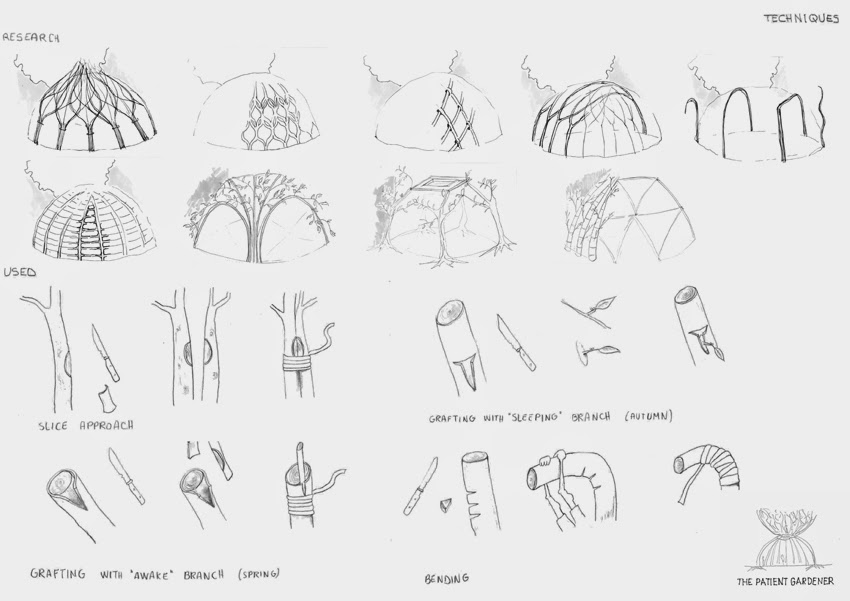 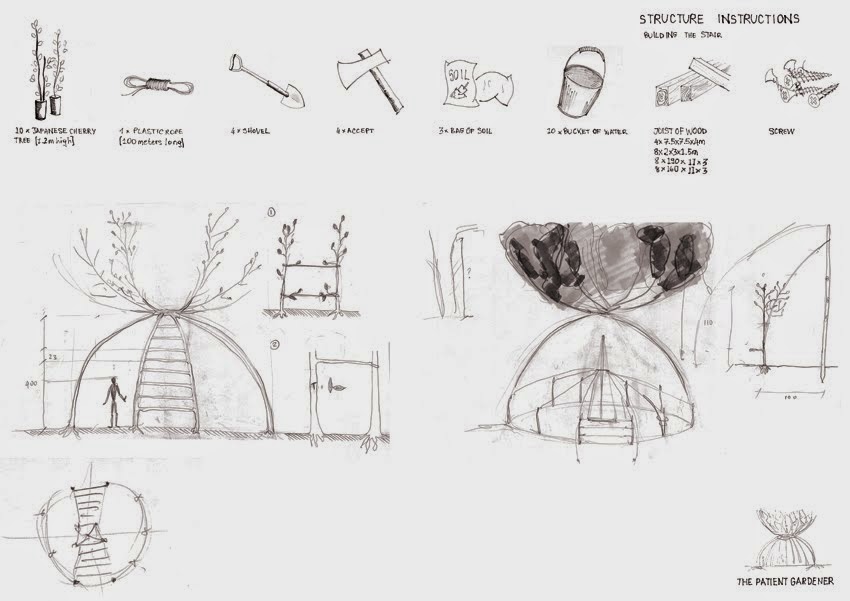 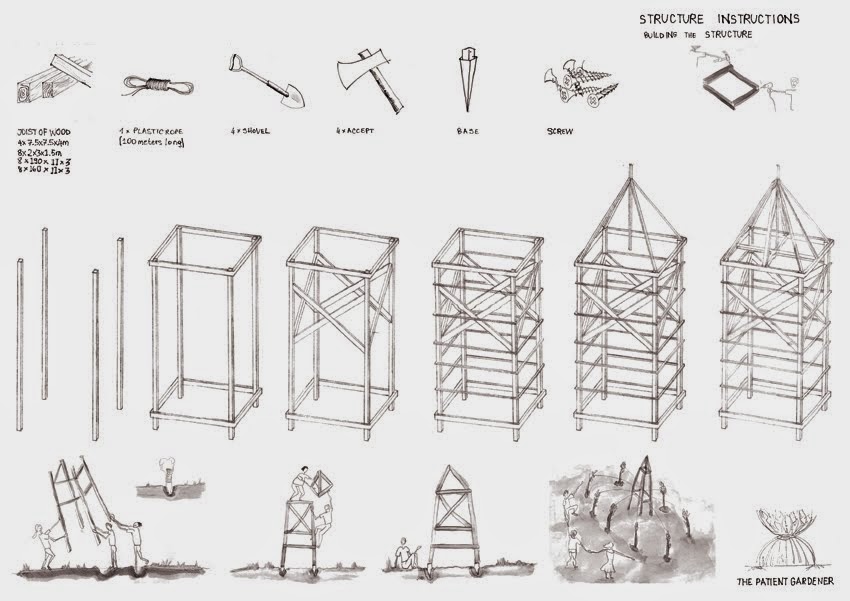 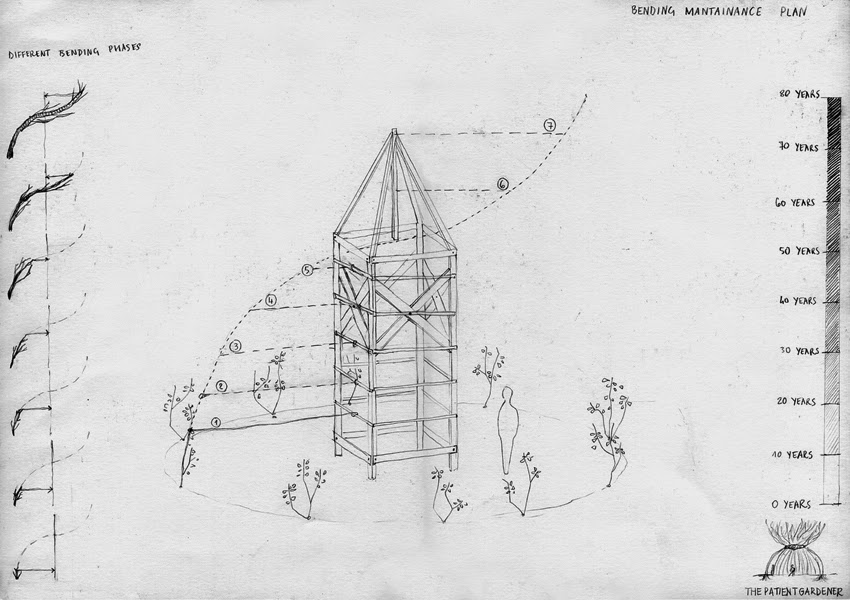 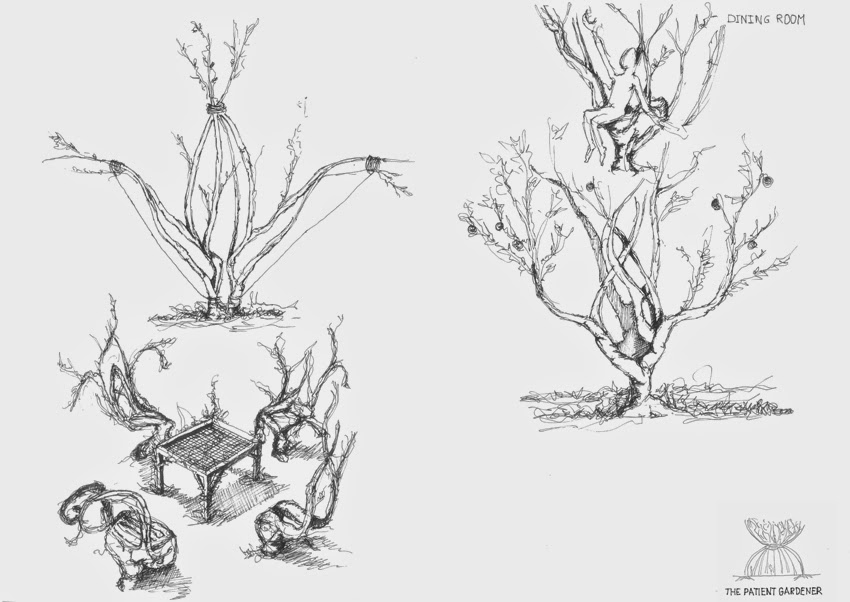 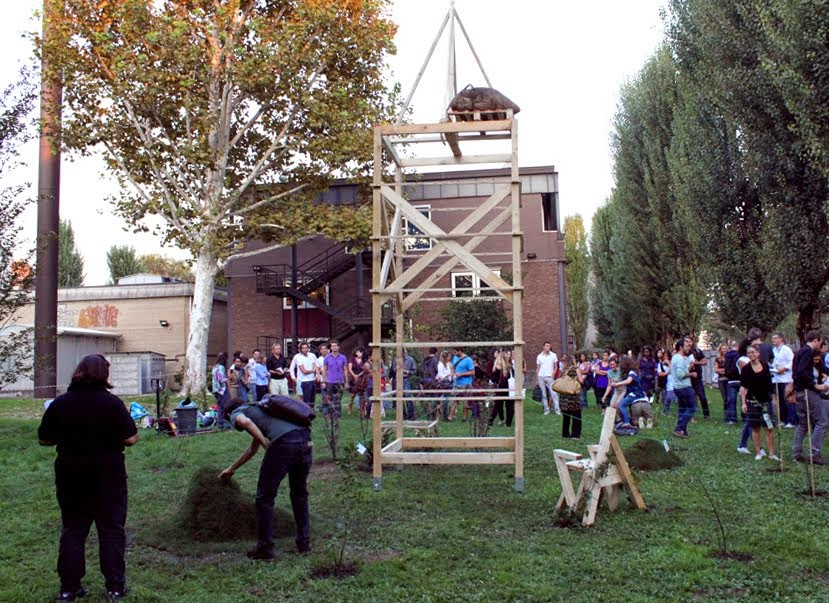 Together with the students we worked out a maintenance plan and instructions to future gardeners that is simple enough to actually work.On the structure, we instructed that a pattern of wood will be grafted in, leaving two spaces between the trees as entries/exits and the rest is closed in ornamental patterns with branches.On the upper level which is reached by the two staircases with exquisite handrails, is different fruit trees grafted into the cherry trees so the visitor can have a variety of fruits while relaxing in the canopy. Branches are also grafted in for security reasons between the tree trunks.In about 80 years from now the Politecnico di Milano campus will have a fully grown building and the students will hopefully have proud grandchildren that can tell the story of the project for their friends and family.

and thanks to the curators:

and all the other people at Politecnico di Milano that we came in contact with during the workshop.See you in 60 years from now.
Posted by andersberenssonarchitects at 06:33